trips to the Sunshine Coast and Agnes Waters

On Boxing Day we went to the Sunshine Coast for a week as a family. One of my goals was to get up for as many sunrises as possible. It rained almost every morning, but I managed six out of seven.

On the seventh morning it was absolutely pouring with rain, after checking the radar and satellite images on my phone, I went back to sleep. 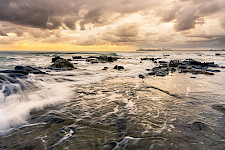 During the week I did manage to photograph the sunrises at Mooloolaba, Alexandra Headland and Coolum Beach.
All of these images were taken after quite heavy rain showers.
On the morning this photo was taken I had stood with my back to the rain for 10 minutes as it pelted down.

I am so glad I didn't give up but waited it out! 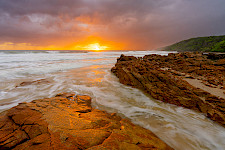 During the second week I headed up to Agnes Waters by myself with the focus purely on photography. It was a shorty trip because of an ex-cyclone bringing extremely heavy rain and winds.

At the Bustard Point Lookout, on the end of the point at Seventeen Seventy, I captured a couple of time lapse sequences.

It was at Chinaman's Beach, Agnes Waters that I was inspired to capture a couple of landscape images. 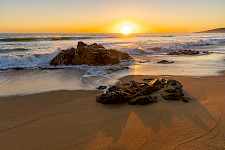 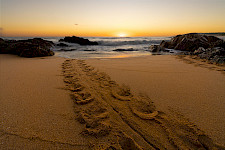 The most inspiring thing I saw was a set of turtle tracks. A female had come up the beach and lad eggs during the night.

As the first person on the beach in the morning I saw these tracks before the tide came in and washed them away. This image speaks to me of the hopes and promise for new life.

I will be heading back to Agnes Waters! 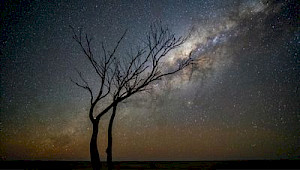 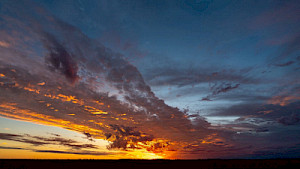