In September the New Moon occurred during the second week of the month. This is when there is no moon in the night sky, and so the stars appear in all their glory. It is also when it is most crucial to escape the light pollution of the cities and major towns. One of my favourite places to go is Mt Slocombe.
The biggest challenge is the distance - it is a thirteen hour drive from Brisbane, where I live. Thirteen long hours.

The payoff is almost zero light pollution. The lights of Yaraka, population 13, are visible 5 kilometres to the south-east. Unfortunately, there are a few flight paths that pass overhead.

This is a stack of 200+ images to produce a startrail. I will soon produce some time lapse video from the night images captures.

For the moment I have the following images taken in the morning just after sunrise. 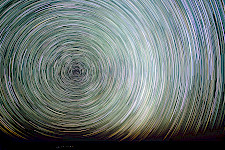 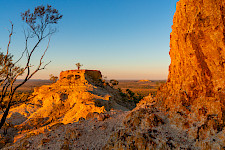 To get this view I needed to scramble down the small cliff to get below the plateau level. The shape of the outcrop mirrors the profile of the rest of the mountain, as you can see in the right of the image.
It may look like this is taken from the top of the mountain, but the bit of ledge visible at the lower right, and the amount that the outcrop extends above the horizon, shows that I am actually on the edge of the second shelf surrounding the mountain. 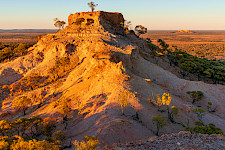 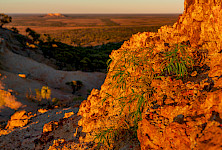 The brilliant orange has incredible depth and is amazing to see. What really caught my eye was the colour of this sapling that had established itself on a small ledge.
This image gives some sense of the vibrance of the scenery during golden hour.

This was my fourth trip to Mt Slocombe, and it will not be my last.

Sadly it was way too windy to use the drone to capture some footage and images.

I also want to head out earlier in the Milky Way season to capture an all night, motion-controlled time lapse sequence. That is one of my personal challenges.

Below are some of the other images I captured on this trip 'Out West'. 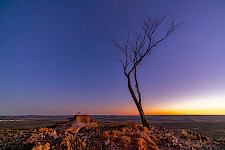 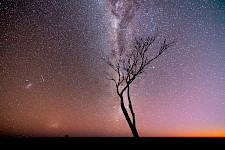 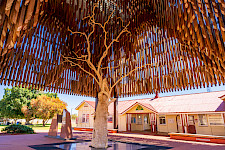